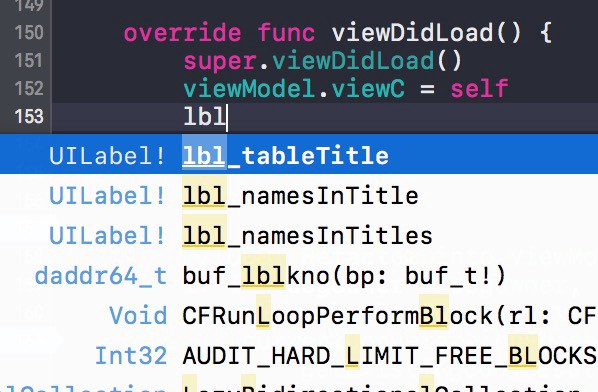 I have reluctantly added another definition to my personal Swift glossary. Its an anti-pattern called “Haystacking” which is….

HayStacking — trawling through the variety of Xcode drop downs trying to find a variable or outlet that can you kind of remember the name of.

Problem: Too many options when selecting from AutoComplete Dropdowns in Xcode

I personally have found that Xcode:

Solution: Add type prefixes to the titles for your IBOutlets to let Xcode help you!

My solution for above is really simple which is adding type prefixes to the title for each of the outlets.

and Xcode suddenly becomes a joy when you ask to see the list of all the labels in a view.

Buttons Actions Vs Outlets is no longer a problem

One additional bonus I have picked up from doing this — is distinguishing an action from a outlet quickly even for outlets I hadn’t created. I noticed that people tend to name their UIButton actions and outlets similarly, which can cause issues.

I name all my UIButton Outlets with the “obtn_” prefix and the actions with the “abtn_”. This “double re-inforcement” has the side effect that I now never forget to click the dropdown to select the ‘action” in the dropdown when creating the action for a UIButton via dragging.

and again we can find the list of all the button outlets in one go:

I have built up a list of the following prefixes- which I find work pretty well, but if you chose to do something like this — make sure you have an agreement with your team/ company to standardise the prefixes that you use.

Above has really made it so much faster and more enjoyable, and at least until Xcode finds away to bring out a list of only a certain set of classes when autocompleting. This simple tip above works a treat and makes working with Swift even more expressive and easy to use.

Edit: ( added after publishing in response to feedback)

eg: using label, the Xcode suggestion will favour the wording which starts with “label” as the first suggestion. It also shows up the class name directly below the correct suggested outlets, which can also be selected incorrectly.

3. There are some people who suggest that devs shouldn’t use prefixes as Swift should read like English. I disagree on this point, I personally think there are enough examples where Swift has chosen NOT to read like English in favour of features/ speed.

Given that Xcode is currently quite buggy with its speed of suggestions, whatever we can do to improve the speed in which we code is worth trying. Hopefully Xcode will improve enough that its easy to identify all the labels/ uibuttons quickly within a view controller, however until then — for me at least, prefixes are my preferred solution.