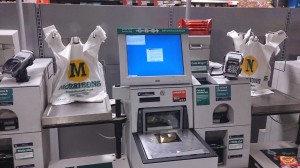 I was delighted to be invited by the simply brilliant BBC Radio’s Mark Forest Show to debate those fantastic( or horrid) self-checkout machines and we ended up revolutionizing Grocery shopping..maybe..

I received a surprise in my inbox a few days ago when a BBC Radio Show invited me along to share my somewhat controversial opinion that supermarket “self checkouts” are actually pretty great.

It was an amazing offer to be their guest for a segment on the the Mark Forrest Show talking about tech.  It did set my stomach a bit to flutters as they have such a large widespread audience.  It is broadcast on all BBC local radio stations across England and the Channel Islands so my perspective was going to be out there for everyone to listen and judge.

The case for the defence of self service checkout technology next with @ukandroid pic.twitter.com/lmXXc6SS0E

I have done quite a lot of public speaking especially via my public speaking group Toastmasters International but to appear on a radio station is completely another experience.  But what a rush!

Radio is much harder than people realise.  Its a little bit like standing on a stage with headphones and a blindfold. No audience to guide you, no knowledge of the questions beforehand and no one to make eye contact with.

But you have to breathe, deliver and focus and get your message across in a hopefully engaging way.

I was amazed,  because as soon as you are on air, the boost of adrenaline coerces your pre-show butterflies into a flock of birds flying beautifully in unison (at least most of the time ) It’s really exciting stuff.  With my body relaxed, my brain could concentrate on my thoughts.  I just had to focus on the message and enjoy myself – which I did massively.  A few stutters, but I hopefully brought a fresh perspective to the debate and got the message across that tech was not to blame but was the answer.

Mark was really superb in his questions which were insightful. He really grasped at the problem that customers are struggling with technology and that there really isn’t anything near drastic enough being done to alleviate these problems at the moment.

Overall – I really enjoyed the experience, and have received some lovely emails and tweets already via my blog.  When I started this blog, it was to share my ideas – and yesterday I was able to do it on a national platform and to get a really positive reaction from Mark and from the audience.

Thanks again to the Mark Forest Show for inviting me and keep up the brilliant work.