Bus stops are pretty much every where in the UK.  Clear Channel, the outdoor UK advertising signs provider, innovated back in 2012 by rolling out over 10,000 NFC/ QR Code enabled digital advertising boards at bus stops around the country.

This seems like a really good idea, bearing in mind that people usually have “down-time” whilst they are waiting for their local bus and can engage with advertising.

Some definitions to help you

NFC – aka Near Field Communication is a quick way to transfer content or data between a phone and another device or Tag, by just tapping them together.  (This is mainly supported by Android, Blackberry and Windows Phone. Iphones do not support NFC .

QR Codes – aka “Quick Response” Codes are the crossword-like images are a next generation version of a bar code.  Customers need to have installed a QR-Code reader onto their phone, in order to get them working.  They are not so popular in UK and Europe, but in the far east, they are massive as most handsets typically come with a QR-code reader pre-installed. 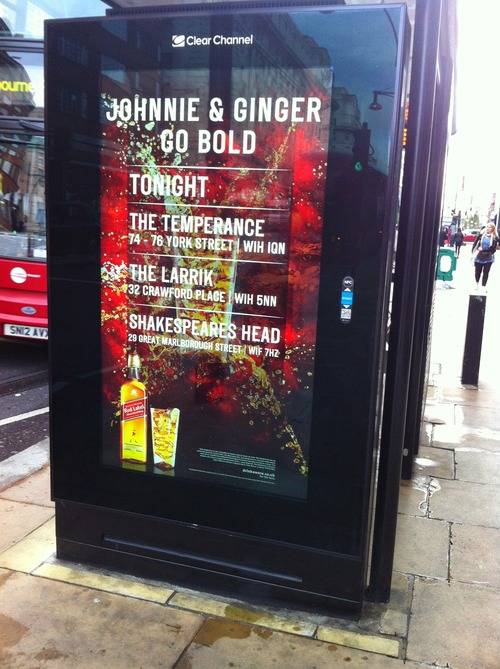 Customers at the bus stop are able to see a variety of adverts delivered.  If they like the advert they can choose to engage with the advert using NFC or QR Code.

The jury is out when it comes to NFC and QR codes.  I won’t get into the debate as to how effective they are as a medium but rather just focus on how they are used in the context of these bus shelters.

For me the element that spoke the loudest was that the advert that was shown on the bus shelter ( see image below) made no reference or call to action to the NFC/ QR code.  If they were that effective then I am sure some clever marketer would have made sure to include it in their advert.

In the time I watched the sign ( roughly 30 minutes ) while waiting for the bus, I didn’t see anyone touch it or engage with it.

I have reached out to Clear Channel themselves to see if they have any good use cases for these, but I personally feel that it was an experiment that lacked a “killer application” to capture public attention.

I hope to be proved wrong.