Getting started with SwiftLint 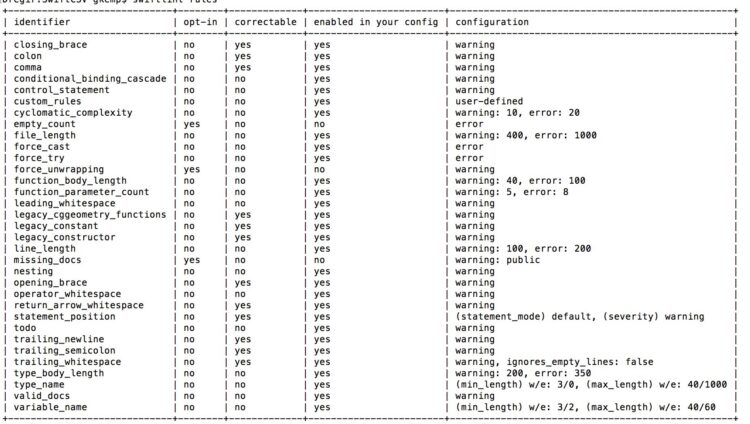 There is nothing better than spending some time to sharpen the saw —and improve the way that I code my apps. By finding new ways to improve the code quality, or efficiency in which I write my code — it pays off big time in being more productive and heck it’s even a bit more fun.

For this week — it was a no brainer. I was chatting with my friend Jane yesterday- and telling her about SwiftLint and her reaction was… “this is awesome” and you should blog about it now.. so here it is.

SwiftLint is one of the new standard tools that I now spin up at the start of every project. This nifty tool is one of the few that will:

SwiftLint works by applying over 75 (and counting) rules which are roughly based on the Swift Style Guide.

An examples of the rules that really helped me were:

The great thing about SwiftLint is that it’s super flexible. You have the ability to use

How to use it

To install SwiftLint — you need to:

Then start building with CMD+B.

3. This is the most depressing part of the whole journey, when you zero error project suddenly generates a massive amount of warnings and errors. Don’t lose faith — we will fix them soon.

Below is an example from a project I use regularly called SWIFTCSV ( a CSV Parser which I am working on porting to Swift 4) where I went from zero warnings and zero errors to ….

5. Run `swiftlint rules` to see what rules you have applied to your project

6. Run ‘swiftlint autocorrect’ which will try and fix the most common errors that it can. For me — it fixed a whopping 17 files straight away.

The rest of the warnings and errors took me a mere 10 minutes, and I could already see the benefit for working with other peoples code, and also making sure that I play nice by giving others better code to use.

Is the tool any good ?

The tool was written by Realm, who have a wonderful simple to use database tool which I encourage you to try out. The team behind Realm have a focus on producing great Dev tools and the quality of SwiftLint is a great showcase for this.