How HP’s digital Kiosk is better than beer

I have had a few people commenting or emailing me over the last few weeks saying that in-store technology is not effective for engaging customers. They are wrong. Here’s my answer.

In-store technology and street digital are still very early in their lifespan.  Already they have picked up quite a lot of controversy with people questioning how effective they are.

When it comes to in-store tech, then the traditional kiosk is like the proverbial black sheep of the digital family.  The value proposition behind kiosk’s are not yet fully defined.  In one company I worked for, they were considered by one director as the  “token technology” tick box which has to be worked on because “we need to give the press something to talk about”

And vastly underestimating the power of what’s possible.

How HP does kiosks perfectly.

HP (aka Hewlett Packard..not the sauce company) seem to really understand the power that an instore kiosk has, and knows how to wield this power.

I want to frame the picture above to show everyone who think kiosks are just a token tech and can’t provide a massive reaction and a really powerful way to connect with people.  The HP designed touch screen kiosk, was the focus of the room and even took people away from the bar area where people traditionally camp out at events.

How could a technology kiosk be better than beer? 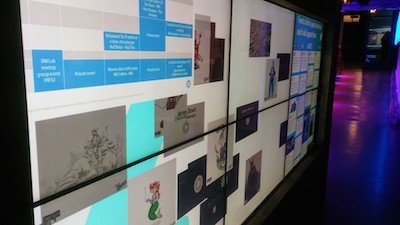 HP’s kiosk is designed to draw attention. The kiosk is made up of a giant touchscreen that was showing videos, comments and pictures but in a very dynamic way (more on that later) To the right of the screen were a couple of LCD screens showing a simple twitter wall. Bright lights and an imposing size draw peoples attention without question. 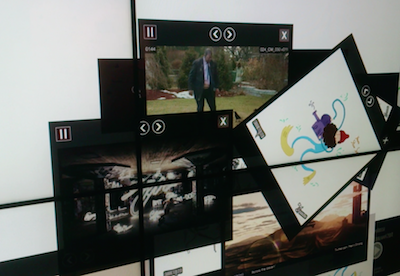 Once attention has been grabbed, it’s all about maintaining the attention. The design of the content is made up of a series of “floating cards” which drift from the right to the left of the screen. If its a video, the video will play without sound.

Begging to be touched

The content on the main screen doesn’t stay static, it moves very gently, which invites it to be touched. And when users touch the content they realise it can be: 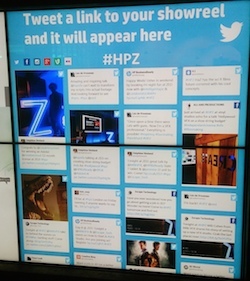 One of the key reasons behind having a kiosk is to engage your customers digitally in a physical place.   The HP twitter wall invites people to email and tweet in their photos and videos for showing on the screen.  Obviously this requires a bit of moderation which needs to be paid for but would you turn your customers away from your store, because you needed to hire staff?

Last but not least, HP gave people what the wanted by only showing beautiful and high quality content via the large screen. This had the effect of making people congregate around the screens in anticipation of more quality images or videos which they could discuss with other people in the room as the ultimate icebreaker.

If HP can do wonders with connecting with their customers at an event, just imaging what others could do using these simple rules that I showcased above.

In-store Kiosks have the massive power to connect with people in a far more powerful way than any other medium we have created to date.  As long as they are done right…. and executed beautifully.

Thank you to HP Z for the wonderful event and cheers for the inspiration.