Quick Guide: What are iBeacons?

Since its Friday, I am going to introduce a new segment to the blog, which explains a piece of technology in hopefully simple terms. For now, I will call this segment Quick Guide ( until I can think of something less Microsoft-esque or you suggest something cool) First up- what are iBeacons?

Since I am starting to get a regular request from people I work with and readers to do something on iBeacons, I thought I would move this topic forward.  Please let me know if this is useful and if its clear?

IBeacon’s are an Apple brand and marketing term for the latest version of Bluetooth, called among other names : Bluetooth version 4, BLE ( Bluetooth Low Energy).  Most recently the technology has been dubbed “Bluetooth Smart” which will be used in marketing and advertising.

Origin of the term IBeacon

Beacons have always existed and have been used for centuries as a method to communicate.  Beacon is defined as a

A  warning, signal,  devices that alert people to their presence. eg a Lighthouse

A great example of a beacon is a lighthouse which shines a light periodically to let passing ships know that it ( and as a result the hazardous coast line) are there.

Apple describe iBeacons as a piece of hardware that is

“Enabling new location awareness possibilities for apps…. A device with iBeacon technology
can be used to establish a region around an object. This allows an iOS device to determine
when it has entered or left the region, along with an estimation of proximity to a beacon”

Wall Street Journal has made a lovely video summary of the technology that covers some good use cases. 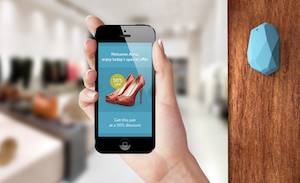 Location has always been core to the mobile experience.  Being able to understand where you are provides great ways to trigger events.  Up until iBeacons, there have been few ways to trigger events whilst in-store.  Thanks to this technology there will be a whole new breed of mobile applications that will be able to personalize their experiences in even more creative ways.

Some example use cases:

Econsultancy has some other great examples of other brands embracing IBeacons in their recent article.  Next week, I will be pulling together some other examples that I think would be particularly interesting to spend some time on.

What does it work with?

IBeacons are now compatible with the following Apple products:

To use iBeacon, you need iOS 7 or later, Bluetooth turned on, and a compatible iOS device:

There are also supporting libraries for Android 4.3+ Devices.

I have seen quite a lot of people already mention privacy concerns when it comes to IBeacons.  Remember IBeacons already require a mobile application to be installed on a handset to work.  IBeacons are dumb devices, all they can do is send a signal.  They can’t impact your mobile device or spy on you, any more than a lighthouse can steal data from on a passing ship with its light beam.

Mobile app developers already have the capability to do a lot when it comes to personal data and GPS.  There are already a lot of safeguards in place to make sure that customer data is safe and private.  The ultimate safeguard is  the same as it has always been… just the simple, if you don’t trust the company, then don’t install their app.

Thanks to the Paypal Developer Team, Sam Machin for sharing some of their iBeacon experience and to the readers who requesting the post.  I hope this was useful, please let me know.